Hypocrisy is the most powerful tool for destroying people’s faith in God and in the Bible. Would you want to be a Christian if it means you could gay-bash in the name of Christianity?
Christianity has been hijacked by people who do not represent Jesus accurately. We have all experienced it. The Christian ‘brand’ has been co-opted by many factions and individuals, including well-meaning relatives and ignorant others, until the words ‘Christian’ and ‘church’ have become worse than meaningless. In the mainstream culture, the word ‘Christian’ has become shorthand for sanctimonious and hypocritical.
What is so bad about hypocrisy? Isn’t that just the blanket crime all teens accuse their parents of? Isn’t that just a petty slander leveled at everyone in a position of authority? No, this hypocrisy is killing our churches and losing souls that would otherwise see Christ. But they can’t see Christ because they see hypocrisy in the guise of Christianity and turn away in disgust. This hypocrisy may be innocent but it is damaging. And Christian hypocrisy misrepresents Jesus and misrepresents God.
The most glaring hypocrisy in the church today, both Catholic and Protestant, is its leadership’s almost unified stand against homosexuality. God made homosexual people. God made all of us in this world because he loves all of us.
Jesus warned us to beware of hypocrites, especially the religious authorities of the Church, the Pharisees. The modern-day Pharisees are on television and in the pulpits. But Jesus speaks to us through the Word and still instructs us to beware of the Pharisees.
Get God is Gay on Amazon and learn what were the actual sins that the Bible warned God’s people about in the early church. It wasn’t homosexuality. The Bible never called out Sodom and Gomorrah for homosexuality. So what were the sins of Sodom and Gomorrah? What were the sins in the Bible that were considered abominations? You will be surprised they are behaviors that can be found in any church today. But you will never hear a sermon against it from the pulpit. Hypocrites. 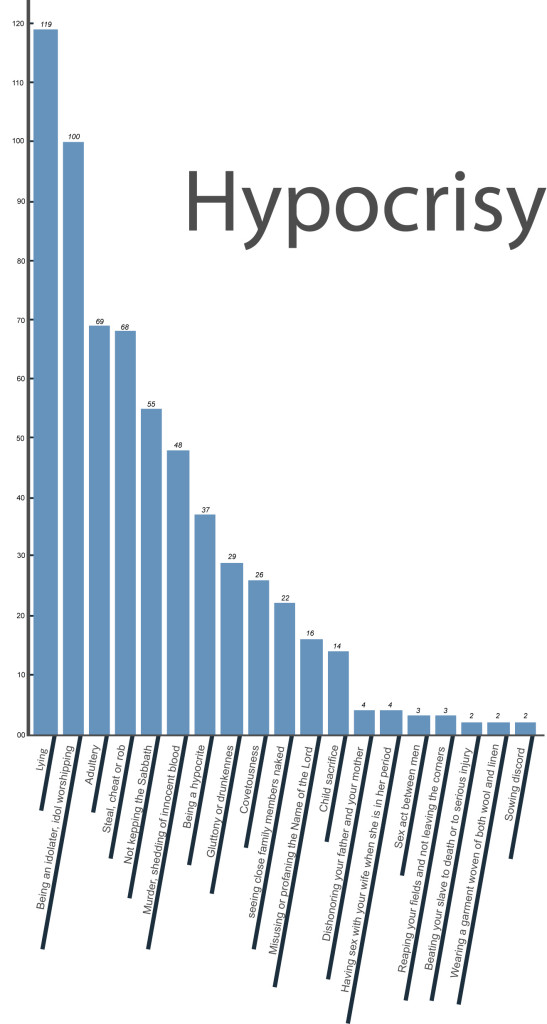 This chart shows how many times each of these behaviors is mentioned in the Bible as a sin, often an abomination punishable by death.By a simple count, the most cited sin in the Bible is lying. It beats out murder and adultery. But of all the sins in this bar chart, the only sin that any contemporary church doctrines have singled out, as a bar to church inclusion, is sex between same-sex couples. Which doesn’t make sense. Hypocrites.